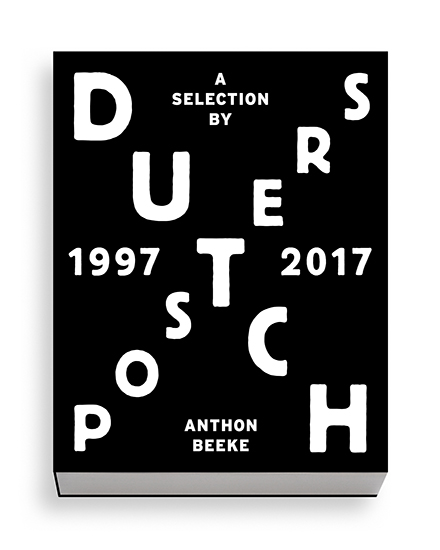 This book offers an overview of Dutch cultural posters from 1997 to 2017 as chosen by Anthon Beeke. It is a sequel to Dutch Posters 1960-1996, a publication that was also compiled by him. Beeke selected about 350 posters which he found intriguing, special, striking or representative from the 3,500 posters submitted by 150 designers.
Dutch Posters 1997-2017 presents a wonderful survey of the development of poster as a medium. They say something about the age in which we live, about the art that we create, but above all about the design discipline. Beeke shows how Dutch poster designers stand in a fertile tradition that dates back to designers such as Piet Zwart, Dick Elffers, Willem Sandberg and Wim Crouwel. It is impossible to imagine that tradition without Beeke’s own posters. He was a master of the genre and had an unparalleled command of the medium, serving as an inspiration to many others. His keen eye and the personal selection give this book an added value.
Frederike Huygen sets the posters against the backdrop of developments in the profession and the medium. Bob Witman writes about Beeke’s criteria for and perception of posters. The book is a refreshing and rich survey, initiated by Saiid & Smale.
After all the proofs had been approved and this book was ready to go to press, Anthon Beeke died unexpectedly on 25 September 2018 in his home city of Amsterdam. This book is thus an ode to one of the best post-war poster designers in the Netherlands!

SAIID & SMALE Saiid & Smale is a multidisciplinary graphic design agency in Amsterdam. Janneke Smale and Omar Saiid both worked at Studio Anthon Beeke before setting up their own agency in 2010. www.saiidsmale.com